BARRIER X was released on Steam with trading card support on 27 May 2016. There are 5 cards in the series, and you'll receive 3 cards at random for purchasing and playing the game.

While in-game, you control a triangle. The goal is to avoid the red lines that signal an obstacle ahead, and live as long as possible without crashing. Crashing will end the game and you will be put back at level one when you do another round. A similar game could include Geometry dash, where you control an icon and can't crash or you will be at the beginning of the level again (according to steam). Steam Trailer

Nothing Can Stop Me!

Nothing Can Stop Me!

Level 5
I Am The Danger 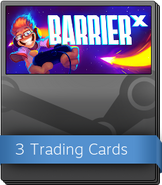 Nothing Can Stop Me!
(Uncommon)

1 of 5
Retrieved from "https://steamtradingcards.fandom.com/wiki/BARRIER_X?oldid=375774"
Community content is available under CC-BY-SA unless otherwise noted.