FX Football was originally named FX Eleven, and during that time period had trading card support added on January 31, 2014. On June 2, 2014, the game was rebranded and relaunched as FX Football. There are 8 cards in the series, and you'll receive 4 cards at random for purchasing and playing the game.

The original trading cards carried over through the rebranding, but the card images changed to reflect the new game name. To see the original images, visit the FX Eleven page. 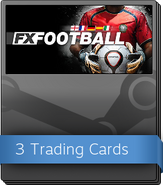 1 of 8
Retrieved from "https://steamtradingcards.fandom.com/wiki/FX_Football?oldid=230073"
Community content is available under CC-BY-SA unless otherwise noted.