Reversion - The Meeting had Steam trading card support added on 8 July 2014. There are 8 cards in the series, and you'll receive 4 cards at random for purchasing and playing the game.

This is the second part of the Reversion series, starting with Reversion - The Escape. 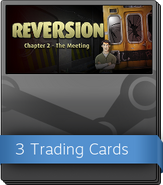 1/8
Retrieved from "https://steamtradingcards.fandom.com/wiki/Reversion_-_The_Meeting?oldid=376731"
Community content is available under CC-BY-SA unless otherwise noted.