Time Ramesside had Steam trading card support added on June 11, 2014. There are 9 cards in the series, and you'll receive 5 cards at random for purchasing and playing the game. 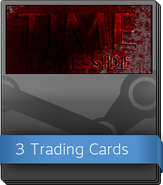